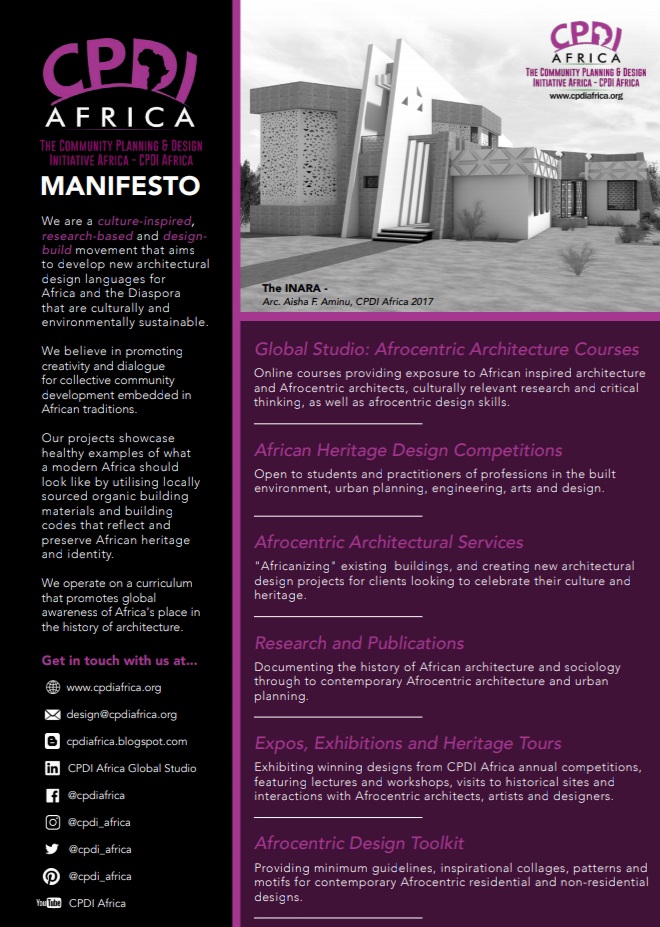 The Community Planning & Design Initiative Africa (CPDI Africa) Promotes the Development of New Architectural Languages for the African Diaspora that are Culturally and Environmentally Sustainable.
Believing that the development of African and Diaspora built environments should be as then has always been, built as a collaborative effort between the community members and designated master builders, CDPI Africa engages participation from the design community in Africa and the Diaspora at large, for the accomplishment of its vision. CPDI Africa is culture-inspired, research-based and is committed to an African Centered pedagogy for teaching architecture and sustainable development philosophies 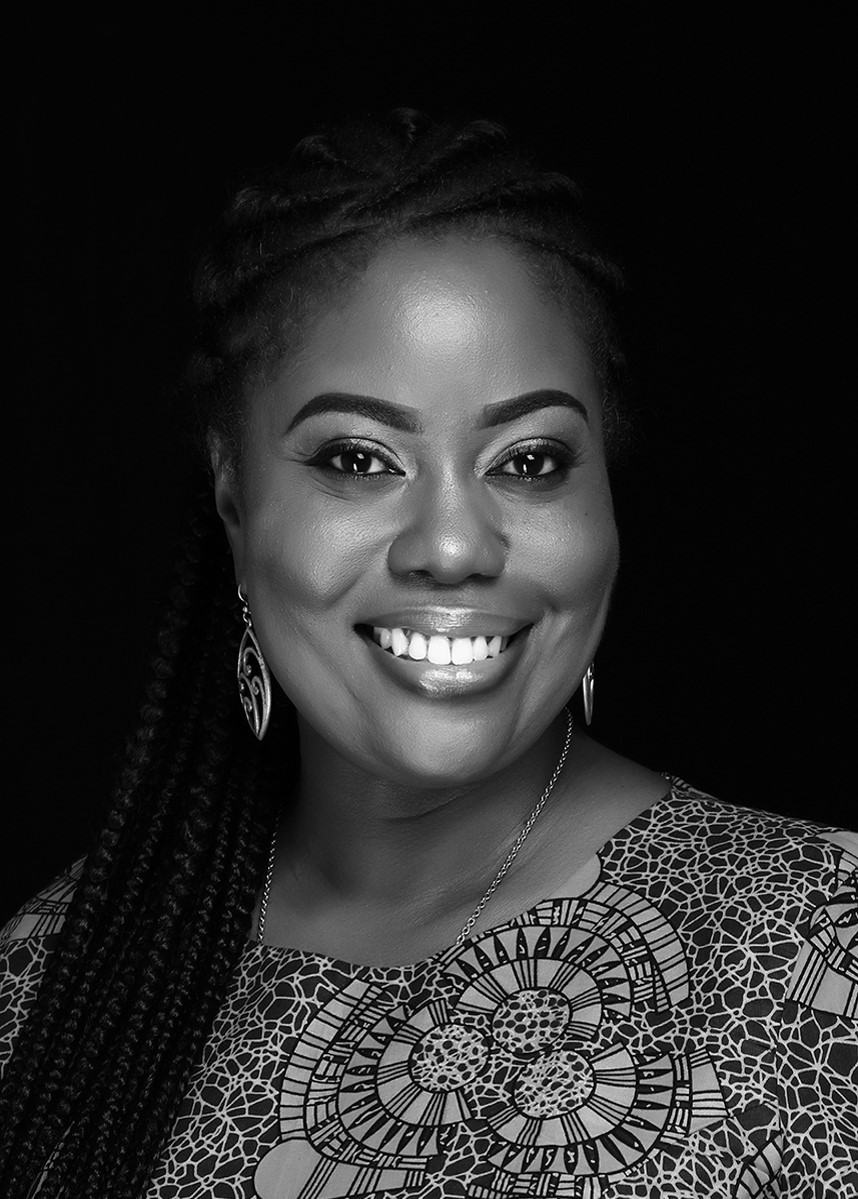 Nmadili Okwumabua is a Professor of African Architecture and Urban Design and the founder of the Community Planning and Design Initiative Africa (CPDI Africa). Her passion for design is rooted in a vision where communities in Africa and the Diaspora are developed with new architectural languages that are Culturally and are Environmentally Sustainable. Nmadili attended the University of Tennessee and Georgia State University, where she pursued her undergraduate studies in architecture and urban studies. She holds a Masters degree in African Studies from Clark Atlanta University, where her research centred on the evolution of Nigerian modern vernacular architecture in the works of Master builder Demas Nwoko. She is a licensed Realtor in the state of Georgia and Certified Property Manager with Broll CBRE South Africa.

In 1999, she founded Southern Sahara USA, a design consultancy service specializing in the research and development of this new architecture. In 2013, she launched CPDI Africa, the culture-inspired initiative that promotes these new architectural languages though design competitions, lecture series, workshops, architecture exhibitions and international global studios for teaching African centred architecture. Cultivating a built environment career that has spanned over 25 years, Nmadili Okwumabua lives in Atlanta Georgia and Abuja Nigeria, where she continues to offer international consultancy services in urban design and real estate asset management.

Developing New Architectural Languages for African and the Diaspora that are Culturally and Environmentally Sustainable! 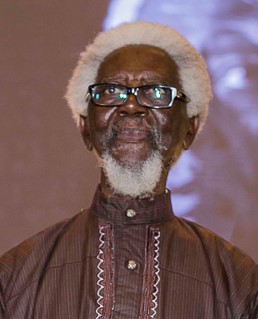 DEMAS NWOKO is a Nigerian artist, protean designer and architect. As an artist, he strives to incorporate modern techniques in architecture and stage design to enunciate the African subject matters in most of his works . He was a member of the Mbari club of Ibadan, a committee of burgeoning Nigerian and foreign artists. He was also a lecturer at the University of Ibadan. He was the publisher of the New Culture magazine. Demas Nwoko is a respected Nigerian artist, architect and master builder in Nigeria. Nwoko’s works fuse modern techniques in architecture and stage design with African tradition. With works like The Dominican Institute, Ibadan and The Akenzua Cultural Center, Benin to his credit, Demas Nwoko is one ‘artist-architect’ who believes in celebrating the African tradition in his works. In 2007, Farafina published The Architecture of Demas Nwoko, a study of Nwoko’s work and theories written by two British Architects, John Godwin OBE and Gillian Hopwood. He led the way toward a modern mode of expression in African art, theater, painting, and architecture. In addition, he is a fine actor and dancer, having performed in numerous plays in Ibadan. Nwoko, sees design as an ingenuous activity that carries with it a focus on social responsibility for positive influences in the environment and culture of the society 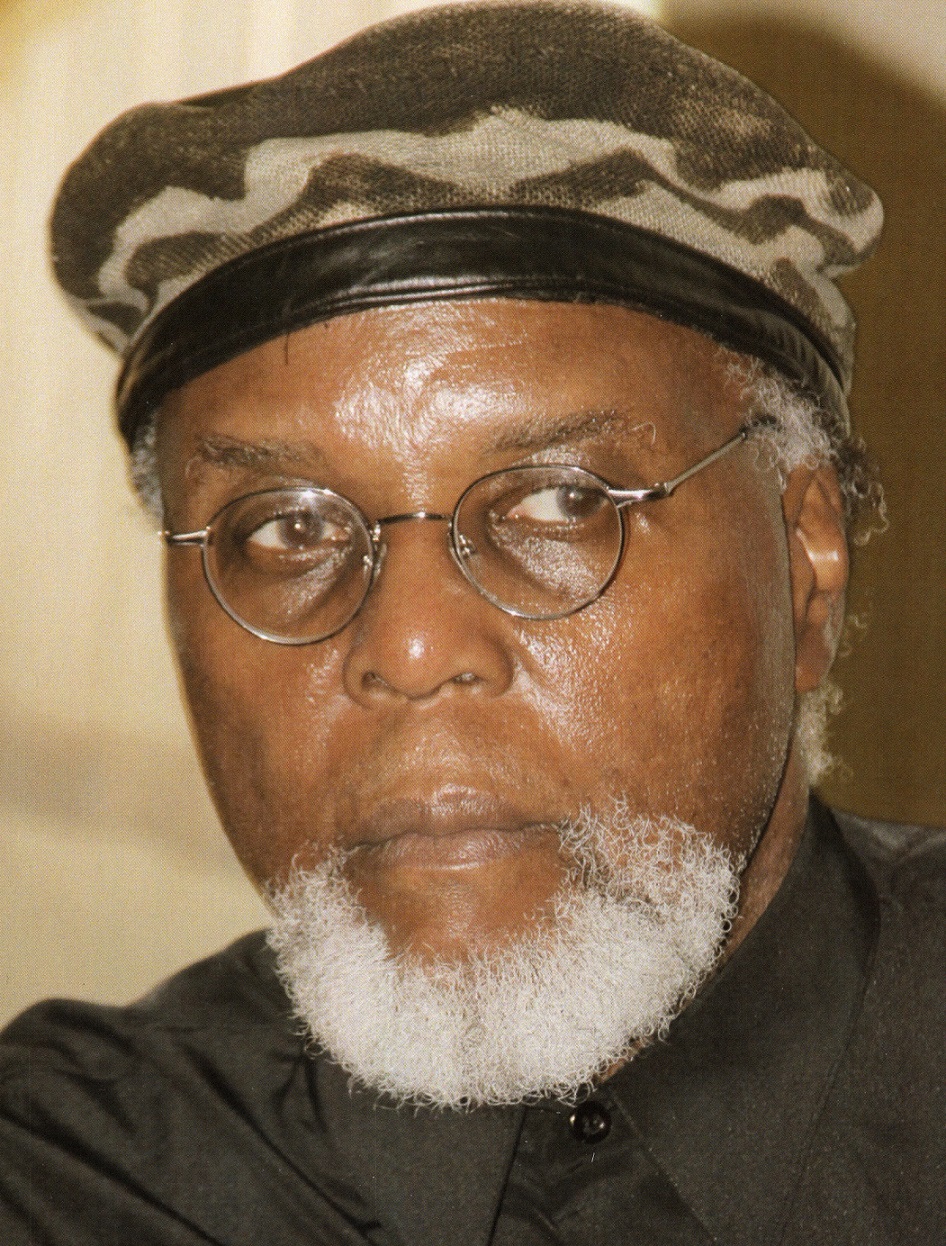 Professor Hughes is an architect, author, and academic, who is making a significant contribution to the profession and practice of architecture and to the advancement of humanity. As an architect, Professor Hughes is certified by the National Council of Architectural Registration Boards and the Council of American Building Officials. He is a certified as a Professional Planner, and he is licensed in eleven states. He has served as an officer in the National Organization of Minority Architects and in the American Institute of Architects-Cleveland. He continues an active private practice as a consultant in architecture and urban planning. As an author and academic, Professor Hughes has logged over 30 years of international travel on four continents and to over 50 countries. As a student, academic, and Fulbright scholar, he has compiled the most exhaustive slide documentation/archives of modern contemporary architecture on the African continent, and on architecture influenced by African elements, held by any scholar worldwide. This work is the foundation of his theory, Afrocentric Architecture, featured in his seminal work on this body of thought, Afrocentric Architecture: A design primer. 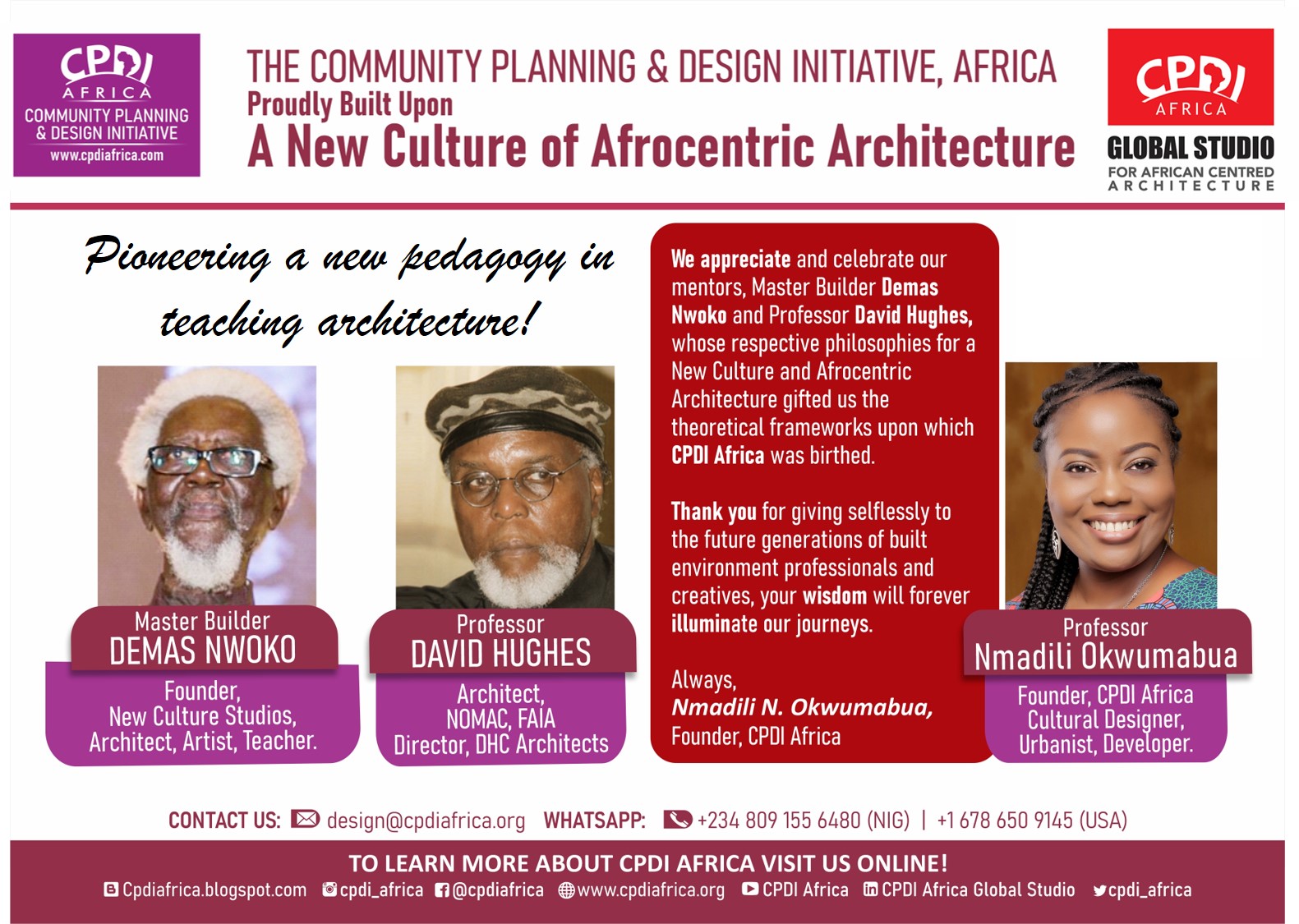 We wish to extend a special thank you to our long-standing partners and collaborators! This journey would not be complete without your commitment to the vision. Vote of thanks to our highlighted affiliates, and many more celebrated in our chronicles of events, speaking engagements and African architecture exhibitions:

Click to enjoy a chronology of Events, Presentations and Collaborators of CPDI Africa around the Globe!